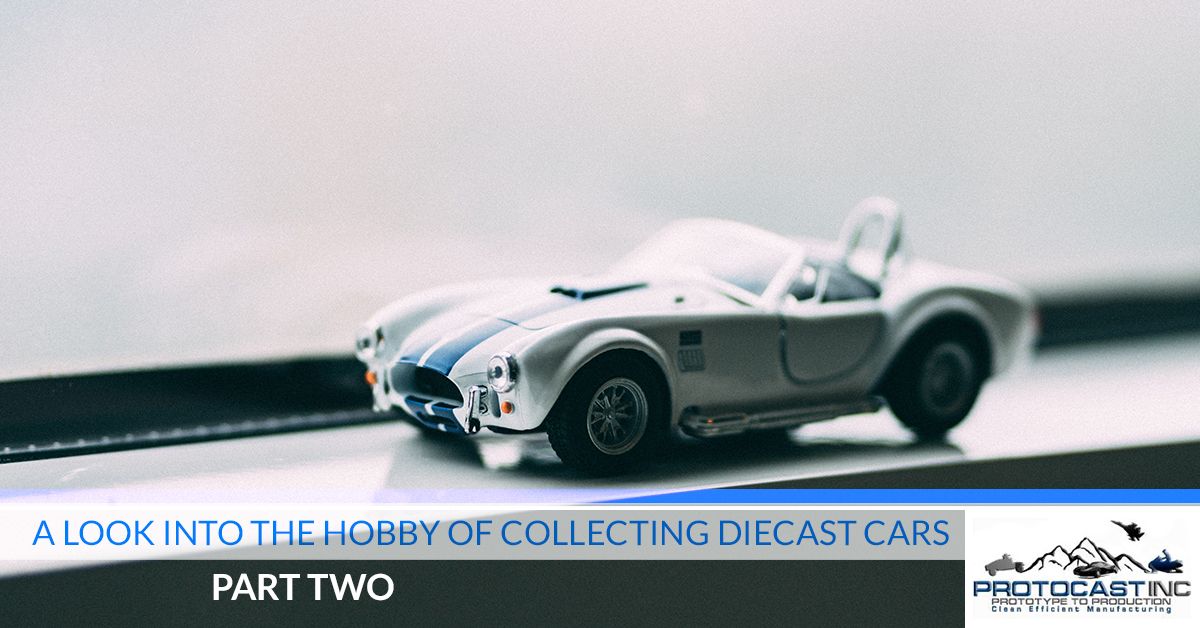 A Look Into The Hobby Of Collecting Diecast Cars, Pt. 2

In our previous blog post, the diecast tooling experts here at Protocast Inc. took a look at collecting diecast cars - something that’s not quite the same as what we do, but with the same name of “diecast”, we figured, why not? While another post on the matter might not fully illustrate the art of collecting diecast cars, we’ll give it our best shot.

Rapid Prototype Casting Services In Denver You Can Rely On

While our Denver machine shop specializes in many other hard tooling and metal casting besides die casting, Protocast Inc. does have an in-house tooling department specifically dedicating to cutting a hard tool from steel. Sand casting, aluminum prototyping, and general rapid prototype casting are other foundry services that we specialize in, and if you’re curious about our foundry can help you and your business, we’d love to hear your questions! Get in touch with Protocast Inc. today.

Now, we’re going to continue touching on the ins and outs of diecast car collection.

Interestingly enough, the history of scale model cars is almost as old as the automobile itself! Many historians credit a man named Frank Hornby of Meccano for creating the first scale model car back in 1901, however, it was actually the French company CR (named after its founder, Charles Rossignol) who created the first motorcar scale models at the end of the 19th century. Because welding wasn’t yet invented at this point in history, original diecast cars were created by stamping tin plates together.

While Rossignol and his company did technically create the first car scale models, it was Hornby of England who popularized the idea of diecast cars. On the other side of the Atlantic, the Dowst & Shure brothers started making toys under their brand Tootsie back in 1909. So, it’s pretty fair to say that diecast cars have some fairly extensive history.

In more ways than one, diecast car models are equivalent to fine mechanical timepieces. Similar to how the value and rarity of a mechanical watch increase with the number of complications that it has, a diecast car’s rarity and value also increases, but with the number of moving parts that it has. Some of the more expensive and complex diecast model cars include functioning parts like a moving set of suspensions, steering, doors, mirrors, and an openable hood and truck. Pretty cool, right?

The size of a diecast car also plays an important role in determining its value - generally, the larger the size of the model car, the more value it has. For example, 1:18 scale diecast cars would be more valuable than, say, 1:43 scale cars. Most common car manufacturers give out licenses to manufacture diecast car models to several vendors, but some higher-end companies like Bugatti or Ferrari tend to keep their licensing a little more exclusive, driving up the value of their signature diecast models.

Creating The Things You Love With Rapid Prototyping And Die Casting

When you do a production run of your product, you’ll want to make sure that everything is perfect, and that’s where our rapid prototyping services come in. For the ultimate precision engineering and die casting services, contact our Denver foundry today here at Protocast Inc.